SBF’s Alameda Blew Up Along With 3AC in Q2, All Behind the Scenes Details

A study showed that Alameda had already increased significantly in the second quarter, but substantial funding from FTX assisted it in continuing to grow…

After the recent Alameda Research drama that has been playing out over the last five days, FTX Exchange has finally decided to reach out to Binance for a buyout. This was confirmed by Changpeng Zhao, CEO of Binance, with a tweet stating:

” This afternoon, FTX asked for our help. There is a significant liquidity crunch. To protect users, we signed a non-binding LOI, intending to fully acquire FTX.com and help cover the liquidity crunch. We will be conducting a full DD in the coming days.”

However, there’s been more to the FTX drama in the last few days than what meets the eye.

A lot has been happening behind the scenes, and while FTX chief Sam Bankman-Fried claimed that this has been going well for the company he was actually scouring $1 billion in fresh capital from Wall Street and billionaires in Silicon Valley.

“The firm was seeking more than $1 billion in financing before the Binance deal was sealed, with one adding that by midday Tuesday the hole appeared far deeper — closer to $5 billion to $6 billion.”

This makes it abundantly clear that FTX was facing an insurmountable liquidity crisis, despite SBF’s false claims to the contrary. The deal has sent shock waves throughout the crypto community, causing a 10% correction in the last 24 hours. As a result, the crypto markets have lost a staggering $100 billion in value over just the last day.

Lucan Nuzzi, head of R&D at CoinMetrics, has recently published a report that unveils how Alameda Research was struggling during the second quarter of 2020. According to Nuzzi’s account, Alameda only survived because FTX was giving them massive financial aid; however, this eventually backfired on the crypto exchange.

A shocking 4 billion USD worth of FTT tokens became active just 40 days ago, on September 28. This caused $8 billion to move on-chain that day, which is one of the largest ERC20 daily moves ever recorded, according to CoinMetrics. 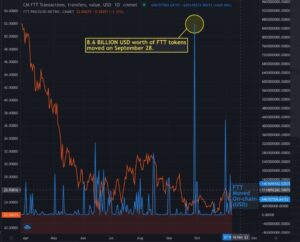 Interestingly, Nuzzi also found a transaction that interacted with a contract from the FTT tokens ICO back in 2019. He added that the recipient of the $4 billion worth of FTT tokens was Alameda Research. However, what followed was interesting! citing data from Etherscan, Nuzzi explains:

” Alameda then sent that *entire* balance to the address of the deployer (creator) of the FTT ERC20, which is controlled by someone at FTX. In other words, Alameda auto-vested $4.19 billion dollars worth of FTT just to send it immediately back to FTX.”

Nuzzi believes that Alameda blew up in Q2 itself with Three Arrows Capital (3AC) and others. It only survived since it was granted to receive the $4 billion collateral in FTX four months later. Nuzzi further explains:

” Remember, the FTT ICO contract vests automatically. Had FTX let Alameda implode in May, their collapse would have ensured the subsequent liquidation of all FTT tokens vested in September. It would have been terrible for FTX, so they had to find a way to avoid this scenario.”

Alameda’s help has given Voyager digital a bailout, which in turn makes FTX look responsible and reliable. However, what people don’t know is that it was FTX bailing out Alameda. Now this lack of balance is catching up to FTX and causing problems.

Some investors in FTX are panicking over the amount of money they have invested. According to a report from The Information, venture capitalists are concerned that their investments could be totally wiped out.

The four backers of FTX told the publication that they don’t know what will happen to their equity stakes in FTX because of the Binance deal. They are also trying to figure out how this will affect their investments.

Some venture capital firms and institutional investors are worried that their investments might lose all value. Recently, crypto exchange FTX raised $2 billion from VCs at a valuation of $32 billion. Sequoia Capital and Paradigm are among the largest VC backers for FTX. However, FTX chief Sam Bankman-Fried wrote a letter to investors saying:

” “Our first priority is to protect customers and the industry; we’ll soon be focusing on our second priority: our shareholders”.”

Du Jun, co-founder of Huobi exchange said that individuals should protect their assets first. However, there is not enough clarity on how FTX plans to do this for its investors. He said:

” FTX has withdrawn more than 6 billion US dollars of liquidity from the market in the past week. Those lending institutions that provide credit to Alameda and the centralized platforms that have been withdrawn by FTX are at risk. Protect your assets and don’t pay for the mistakes of others.”

In the last day, the price of FTX Tokens (FTT) has decreased by 75%, currently selling at under $5. In only 24 hours, nearly $2 billion worth of value has been lost from FTX, and in 5 days that number becomes $3 billion.

After the recent episode, Binance has promised to be more transparent with its users. To maintain this transparency, the crypto exchange will soon implement Proof-of-Reserves. These auditable merkle tree proof-of-reserves will ensure that the exchange always has 100% reserves.

Binance CEO Changpeng Zhao has asked other cryptocurrency exchanges to adopt Proof-of-Reserves, following transparency concerns in the industry. After his request, OKX, Bidget, Gate and Huobi said they would publish their merkle tree reserve certificates.